Ok, so beware, I have given the floor to Aslan for the duration of the post and he has taken full advantage of the infinite space below. But I beg you, give him a chance, and comment below, as he might even get a monthly column on the blog after this magnificent post.

Yes? Is that you? Of course. We were expecting you. Come in, come in. You can leave your coat on the hanger. What am I talking about? It’s summer! Boy, sorry. The heat is frying my brains. Oh, did I ever tell you about my tía Dora’s sesos/brains quesadillas?! One of the world’s ‘highest’ delicacies, anatomically and gastronomically speaking.  She made them especially for me and my grandpa every Rosh Hashanah. Which means we only had two or three of those lovely things a year. The point being that my head might as well be folded into an oil-drenched tortilla. By the way, I was talking with my grandma about cooking sesos the other day and learned they are a total nightmare to clean. More than any other part of the body! That’s kind of telling, methinks. And funny/gross. Georg Frederich Hegel may very well have conceived that History unfolds dialectically aiming for the realization of the Spirit or Geist, but, speaking from a strictly down-to-earth perspective, all those high-flown ideas emerged from a frontal lobe that was as full of callous impurities as the cute tiny hemispheres of Mary’s little lamb.

The pleasurable ingestion of the cranium’s soft and intricate tissue elicits, of course, a very fascinating question. Great minds think alike, but do they taste alike? Which human encephalon do you think would make the best quesadilla—Einstein’s or Napoleon’s? And do things like gender and nationality make a difference? What about area of expertise? I’d much rather have Emily Dickinson’s than René Descartes’, that’s for sure. “I think therefore I am.” God, what a bore. No salt and pepper on that one. Virginia Woolf’s brains should have been exquisite, though: salty and tender and kind of electrical if you ate them fresh. Or really any mind that is really good in describing the sea. And a little eccentricity couldn’t hurt. Have you read Georges Perec? I would have his encephalon buttered, with a side of snails. I know, I know. It’s human beings were talking about here. But I’m not talking about eating Trump’s feet à la veracruzana. Even cannibalism has limits.

Anyway, what the hell am I saying? It’s a shame tía Dora can’t give this cerebrum of mine a good clean. I haven’t even offered you a drink! Pfff… And now I’ve probably spoiled your appetite, no? Tamar here is way way better than I in getting to the point. But I’m gonna be your guide today. So I’m not saying it’s gonna be easy, but let’s try getting through this together, yes? Come into the kitchen, then. 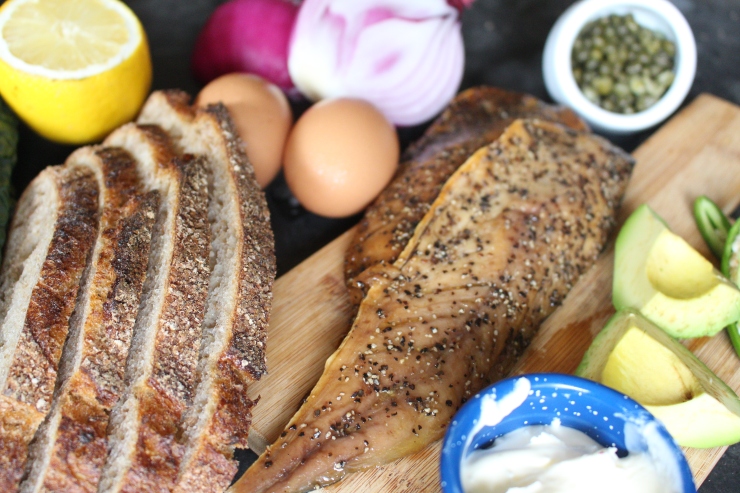 Oh God, don’t you just love how all this looks against the pitch-dark background of our kitchen counter? It kind of hits the poetic button, doesn’t it? I hereby christen this frame: “Still Life Emerging from Night: Breakfast.” But I should get to the point. Sorry, sorry, Tamarito. Ok.

Today, Madams et Messieurs… Today we’re making white-fish toast with eggs poché. That’s right! Every ingredient on this plate is kind of oh-la-la. The thick white substance on that cute little blue cup—not mayonnaise, but… crème fraiche. And have you noticed the bubbly corrugation of those enormous leaves? [Insert Photo] Oh, not your average overpriced kale, I assure you.

Yes, my friend, these kale leaves are so irresistible that when I first saw them in the vegetable section, all moistly and shiny with supermarket dew, I couldn’t help but pick them up and wave them fan-like to my face. And sorry if there’s no visual record of this glorious moment. But I mean just try and picture me standing there, amidst Whole Foods aisle 1, being caressed by a current of organic, locally-grown air, like some dystopian Roman Emperor in the era of Gluten-Free. Illusions of kaleur…

And now, dear visitor, to the substance of all things! And I’m talking about the four elongated slices of fresh sourdough you see here, domino-ed on one another like good sun-tanned pals. [Insert Photo] Oh yes, bread is what I’m talking about. Bread really is the substance, man. Sub-stance. To be below. Basis. You know? Bringing sustenance to our hungry morning selves, and sustaining of our humble fish dish. Capice?

Ok, ok. Tamar’s epic eye-roll reminds this is not the venue for me to dwell on Greco-roman etymologies like some high-school pothead. Ok, ok. But there’s a story here. Turns out this sourdough is a gift from the amazing Sari Glukin, who graciously took us to Graziano’s to have lunch the other day. The place is an instant classic. A traditional sandwich shop, no bullshit involved, that really stands out from the trendy, and borderline pretentious atmosphere of Randolph street. The woman who takes your order calls you honey, and the older lady that cashes you out inhabits a Twin-Peaks like wooden cabin built into the corner of the store. Worth it. 100%. In any case, these guys offer the option of a big-fat Publican ciabatta to make your sandwich. And this Publican reference sets Sari’s mind on a roll. Because this woman is crazy about bread. And I mean, crazy. She will literally drive across the city just to get the right loaf. Anyway, she’s on variation number n on her phenomenal cantata of bread anecdotes when my non-native English speaking brain believes it is hearing a story about Sari encountering the Loaf of Loaves: a miraculously baked rectangle that could be sliced infinitely, like the space between Achilles and the turtle in Zeno’s paradox. So I’m like: hmmm, wait a second, is this what you’re really talking about? And she’s like: “No Aslan, no infinite here.” But the clarification is just as mind-blowing because it turns out she really was telling a story about how she once shared a very big loaf of bread with a very peculiar man from Tulsa who is a rabbi who also bakes for his congregation and who is also obsessed with very weird shit like for example, as a matter of fact, he just spent six months in Chicago taking a course on tailoring. Yes, Aslan, tailoring. Wow. Ok. So, anyway, after we are done eating we are walking around and we pay a visit to Publican Meats. And Sari decides to get some bread. Long story short, they mess up her order and give her a second loaf for free. And, you know, it was no miraculous reduplication or anything, but considering the talk of the infinite and all, I couldn’t help but think of her as a postmodern Jesus in the midst of the miracle of the multiplication of loaves. And sure enough she feeds no multitude, but with all that bread suddenly on her hands, she asks for a brown bag and hands me a good chunk from both loaves, whereupon she throws her amazing punchline: “You see, I only share my bread with rabbis and biblical scholars,” which is, of course, moi. Wink wink.

Well, it may not be funny to you, but it made my day.

Alright. Let’s get on with this.

Here, then, are all the ingredients for the future fish salad: mackerel, lemon, serrano chile, purple onion, avocado, pepper, and the aforementioned crrrème frrrraiche. I mention them in no particular order because we’ll mix them together according to what our good sense dictates. I might even throw a little Worcestershire sauce in there.

This is good. Real good. But… Hmm, perhaps the smoked mackerel wasn’t the best choice? Tamar?

Hmm. No, definitely not. Kind of fishy, right?

Well, as Maximilian used to say, “when in doubt, opt for trout.” Smoked!

And just to reinforce the point here, let me throw this in. In Mexican slang, ponerse trucha literally translates as “to make oneself a trout,” but actually means “to become attentive.” So, come on, póngase usted trucha and get yourself a smoked trout for next time.

But lets not get distracted by the suboptimal quality of the fish. The reality is, the salad is phenomenal: creamy and meaty and smoky and oily and spicy. And those grains of pepper we let slip whole. Boy, they are the ecstasy of the bite.

Now, let’s sprinkle this kale with sea salt and slip it into the oven.

Üf! But what in the Elohim’s name do we have here?! Our majestically supple leaves have turned into soft, crispy, ultra-thin chips. Look at that deep green, darkened by the fire.

This crispy freshness will be the perfect balance to the rich thickness of the salad.

Finally, the poached egg will be our “cherry on top.”  Tamar wants to make it poached because many people ask her how to do it. It’s really quite simple. Just put the raw egg in some vinegar for a few minutes and then throw it into the boiling water.

Wow. See how the egg-white magically envelops the yolk. I love this. Its almost sci-fi looking, right? Reminds me of those mercury lamps they sold at the Sharper Image. Ah, what a wonderfully amorphous, levitating viscosity!

Well, I think it’s ready. Pull it out of the water and pat it with your finger. Ready? Let’s land it on top of the kale, then. You do it. 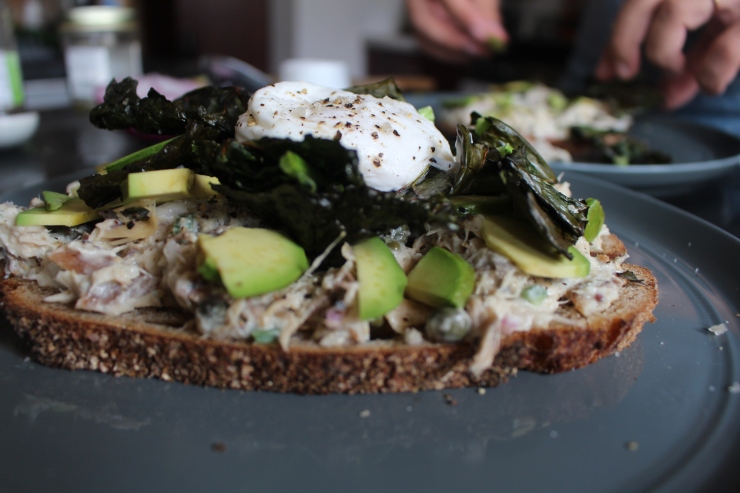 Is your mouth-watering, now, dear visitor?

Well, at this point I’m afraid we’re gonna have to ask you to leave, I’m sorry to say.

Yes, I know. But the thing is, there’s really only enough for two here.

Mix the onion, chile, creme Fraiche, lemon juice, mustard, capers and some pepper. Shred the whitefish into the bowl and combine. Preheat oven to 375º and chop kale. Place it on a baking sheet with some olive oil and salt and bake until crispy, about 10 minutes. Place the vinegar in a bowl and break the eggs into it. Boil water in a pot. After 5 minutes of the resting egg, transfer it into the boiling water and use a spoon to get each egg together. Cook for about 3 minutes, then use a slotted spoon to get it out. Plate the toast pieces, place the whitefish salad on top, followed by avocado, the crispy kale, and the poached egg, seasoned with salt and pepper. 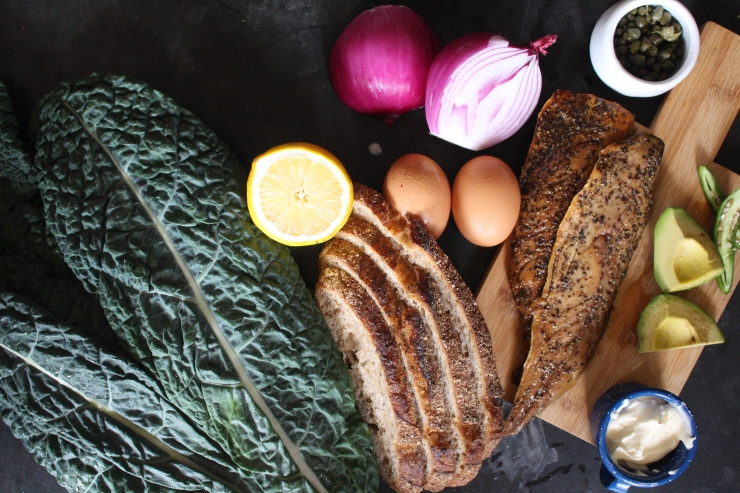