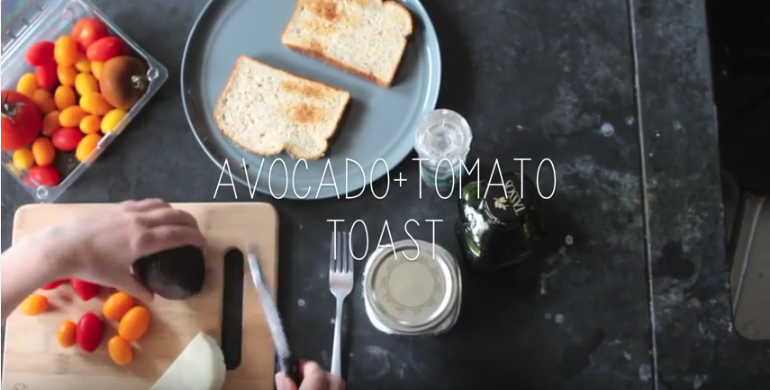 Toasts are simple and good, but there’s not much to say about them, so I decided to research some of its history. You don’t have to be into toast history, so you can skip right to my video, but in case you are, here are a few pretty interesting facts:

Let’s start with the obvious: toast began with bread, which started being produced about 30,000 years ago, however, bread as we know it, was invented in Egypt, where they learned that giving dough some space and air to breath would give it time to rise, and not fall after being baked. The problem with bread was that, left out under the sun for long periods of time (and remember this was the desert), made it hard and stale. So what could they do?, you might ask- Toast.

So no, it was not invented as a way of making delicious breakfast solution, or to have a good surface for Nutella, but to preserve it. Toasting became popular in the Roman Empire, giving it the name “toast,” from the latin “tostum,” meaning to burn. Different devices were used to perfect the toasting, but it wasn’t until 1893 that Scotsman Alan McMasters invented the electric toaster (with iron, which melted and often burned houses, but well, he tried). In 1905, two Chicago inventors created a better one, and it wasn’t until 1919 that the modern pop-up toaster was created. And so it began… the popularisation of toast.

But there’s some other invention I bet you hadn’t thought of: pre-sliced brad (although there is a popular frase,“The greatest thing since sliced bread”) . The first machine to slice bread was invented in 1912 by Otto Frederick Rohwedder in Davenport, Iowa, but the prototypes were destroyed in 1917 by a fire. He didn’t get funding to start again due to the bakers’ concerns that it would go stale, until 1927 when he rebuilt his machine and solved the staleness problem by holding the loaf together with pins (later just wrapping the slices in wax paper), and now we had even, ready to toast slices. And there you have it!, The history of Toast.

And here’s my avocado tomato toast: